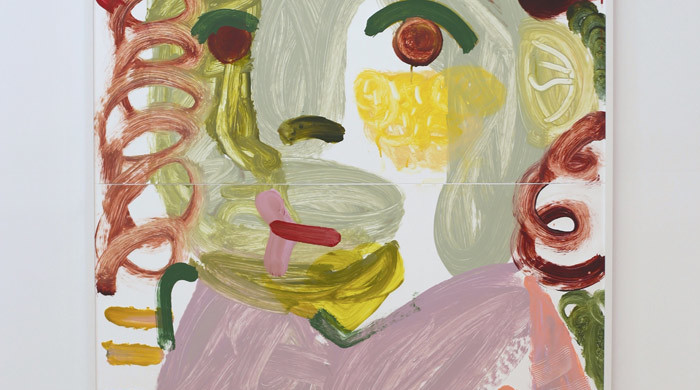 In the contemporary art world, one of the most challenging undertakings is to curate a group show. Featuring the recent works of six artists of diverse backgrounds, the current exhibition at Hansel and Gretel Picture Garden asks bold questions. Is the centuries-old quarrel between painting and sculpture still relevant and how can an artist complicate Foucault’s notion of “picture-object” today? How do cropping, framing, and encasing create, distort, and ultimately enshrine meaning? We cannot escape the obsessive return to the human figure in art, but are there new ways to come to terms with figuration?

Drew Beattie’s Boxhead opens the exhibition and announces its central concern with the relation between gestural painting and the juxtaposition of flat as well as three-dimensional materials. The “head” that the artist shaped from crumpled paper, showing a woman’s face, echoes the dramatically cropped head in Tatiana Berg’s Mallory and the looming head in Dax van Aalten’s Man with a Cup. The distorted features of the woman’s face in Beattie’s piece is paralleled by the squashed, anonymous, and haunting figures in Bell May’s Peep Show. The “head” in Boxhead is also evocative of the shape of a rock in Beattie’s History of Abstraction. This piece juxtaposes the irregular ovoid rock with a smooth rectangular piece of fiberboard, encapsulating, as the artist jokingly said, the historical leap from cave painting to Donald Judd. There is something forceful and convincing in this pairing of materials.

Tatiana Berg’s juxtapositions are inconspicuous, but memorable once noticed: in Mallory, two sheets of yupo paper are joined horizontally; the figure spreads on both sheets, pointing to the artist’s manipulation of the support. Her brushstrokes cannot sink into the synthetic paper, allowing for a continuous negotiation between the indexical and the mechanically produced. 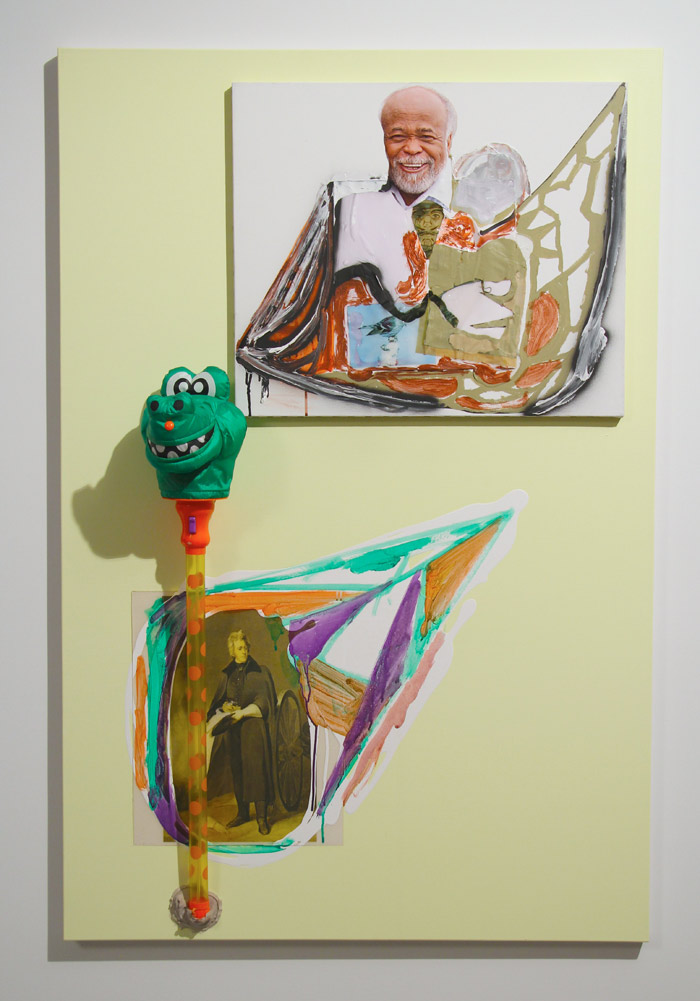 Similarly, Rapson’s Nineteen Drawings Dedicated to the Resurrected Spirit of Karl Marx, a series of transcribed New York Times articles, juxtapose the regularity of typed rows against the dynamic brushstrokes that partially obliterate the copied texts. Rapson’s indexical marks with English distemper, or house paint, prevent the viewer-reader from becoming engrossed in the newspaper stories themselves, but remind us of the surface of the paper and of Rapson’s hand. The focus on New York Times articles about art auctions in Rapson’s series comments on the persistence of the aura of art and on the ability of the art world to create its own mythology. It is not a coincidence that one of Rapson’s chosen articles mentions William Blake. Like Blake, the artists in the show collect, modify, and display fragments that cohere in individual mythologies.

Libeskind’s work functions as the fil conducteur of the exhibition. Each piece in the series focuses on one portrait, cut out from one issue of the Jewel Box Revue. The theater magazine was one of the best known publications of cross-dressers in the 1970s. The portraits are pasted on sheets of color-aid paper that cover the spectrum, alluding to the LGBT rainbow flag. Encased in deep frames, these fragments function like relics in reliquaries or like jewels in jewel boxes. If the preset matte colors used by Libeskind work against these associations, a vibrant and lush green takes over van Aalten’s painting. In his still life/interior scene, fragmented visual elements—a table, a cup, a broken porcelain doll—are invested with narrative potential by the jewel-like richness of color.

The monochromatic backgrounds of Libeskind’s magazine portraits use color frames to a cinematic effect that evokes Goddard. Another term from the vocabulary of the moving image seems appropriate to describe the bold juxtapositions in the show as a whole. Better than the notion of “collage,” Eisenstein’s “montage” captures the works’ overall emotional impact and rejection of medium specificity. Eisenstein was interested in the use of montage in the pre- and extra-cinematographic arts. As montages, the pieces in the Jewel Box Review depend on the synthesis of their respective parts in the imagination of the viewer. The group show, too, is a montage of several voices negotiating meaning across the gallery.